There can be a number of reasons for migrating from one mail server to another, the commonest being “running low on disk storage”. Other reasons may include “the need to having a failover mail server” in case of any catastrophic event that may compromise the active email server, among others.

In other words, this same technique can be used to create a clone of your currently running email server to ensure redundancy.

In order to have virtually zero down time, we will proceed as follows :

Go ahead and install zimbra on the new server. Make sure to use the same version as that on your old mail server. You can follow the guide here. You will need to setup the new mail server with the same settings as the old server, but with a different IP and domain name.

In case you have more than one domain on your old mail server, create only one main domain on the new mail server as the other domains will be imported automatically during the course of the migration.

Remember that if you intend to install a “letsencrypt” certificate later on (note that this is not covered in this blog), your server name needs to be the same as your http://webmail.domain.com name. It’s commonplace for people to use webmail.domain.com.

Warning : Most of the commands executed during export, and more importantly during import, may take hours. These should be run directly from  a console session. If you have absolutely no choice but to run the commands remotely, make sure you use the “screen” command, so that if the connection gets interrupted, you can connect back to your screen, without disrupting any running scripts.

Before we begin the exportation part, we need  to make sure we have enough storage space, which can be accessed from both “old” and “new” servers. The old server may have some sufficient space enough for the exportation to be done, but in case it does not, the way to go would be  to remote mount an NFS share from the new server (since the new server is technically believed to have sufficient free space), on the old server and use it as the intermediate storage.Other ways include an external usb drive, a network attached storage, etc.

END_OF_DOCUMENT_TOKEN_TO_BE_REPLACED

With Q-in-Q tunneling, providers can segregate or bundle customer traffic into fewer VLANs or different VLANs by adding another layer of 802.1Q tags. Q-in-Q tunneling is useful when customers have overlapping VLAN IDs because the customer’s 802.1Q (dot1Q) VLAN tags are prepended by the service VLAN (S-VLAN) tag.

This makes it a suitable solution for service providers since it gives them freedom on which S-VLANs to use without changing customers’ C-VLANs and customers can use any VLANs they want.

In Q-in-Q tunneling, as a packet travels from a customer VLAN (C-VLAN) to a service provider’s VLAN (S-VLAN), a customer-specific 802.1Q tag (Customer’s S-VLAN tag) is added to the packet. This additional tag is used to segregate traffic into service-provider-defined service VLANs (S-VLANs). The original customer 802.1Q tag (C-VLAN(s) tag(s)) of the packet remains and is transmitted transparently, passing through the service provider’s network. As the packet leaves the S-VLAN in the downstream direction, the extra 802.1Q tag (Customer’s S-VLAN tag) is removed.

This solution has been illustrated on a Juniper EX-2300-C Switch with Enhanced Layer 2 Software (ELS) support. 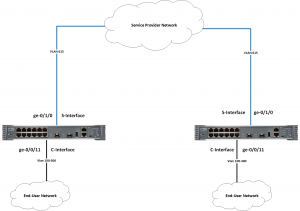 In this tutorial, only “All-in-one bundling” will be covered.

END_OF_DOCUMENT_TOKEN_TO_BE_REPLACED

Virtual private LAN service (VPLS) multihoming enables you to connect a customer site to two or more PE routers to provide redundant connectivity. A redundant PE router can provide network service to the customer site as soon as a failure is detected. VPLS multihoming helps to maintain VPLS service and traffic forwarding to and from the multihomed site in the event of the following types of network failures:

Ideally, each customer should have dedicated physical connections to PEs, but this kind of setup is expensive for service providers to maintain. Therefore, a new approach of Sub Rings connecting different customers with the use of different VLAN-IDs has been lately utilized as shown below. This makes each CPE logically appear as if it’s connected directly to PEs. 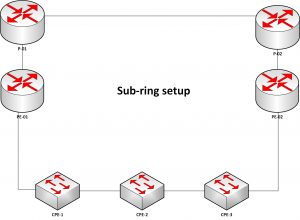 However, VPLS Multihoming was designed to detect failures when the physical interface it’s running on goes down and with this kind of setup, if CPE-2 is multihomed between PE-01 and PE-02 as primary and backup respectively, and the link between CPE-2 and CPE-1 goes down, PE-01 will not notice that failure, therefore, VPLS multihoming will not failover to PE-02 and hence fail-over will not be achieved.

In this blog, we shall cover the set up and configuration of VPLS Multihoming with BGP signaling in a Sub-ring scenario to address the challenge mentioned above.