There can be a number of reasons for migrating from one mail server to another, the commonest being “running low on disk storage”. Other reasons may include “the need to having a failover mail server” in case of any catastrophic event that may compromise the active email server, among others.

In other words, this same technique can be used to create a clone of your currently running email server to ensure redundancy.

In order to have virtually zero down time, we will proceed as follows :

Go ahead and install zimbra on the new server. Make sure to use the same version as that on your old mail server. You can follow the guide here. You will need to setup the new mail server with the same settings as the old server, but with a different IP and domain name.

In case you have more than one domain on your old mail server, create only one main domain on the new mail server as the other domains will be imported automatically during the course of the migration.

Remember that if you intend to install a “letsencrypt” certificate later on (note that this is not covered in this blog), your server name needs to be the same as your http://webmail.domain.com name. It’s commonplace for people to use webmail.domain.com.

Warning : Most of the commands executed during export, and more importantly during import, may take hours. These should be run directly from  a console session. If you have absolutely no choice but to run the commands remotely, make sure you use the “screen” command, so that if the connection gets interrupted, you can connect back to your screen, without disrupting any running scripts.

Before we begin the exportation part, we need  to make sure we have enough storage space, which can be accessed from both “old” and “new” servers. The old server may have some sufficient space enough for the exportation to be done, but in case it does not, the way to go would be  to remote mount an NFS share from the new server (since the new server is technically believed to have sufficient free space), on the old server and use it as the intermediate storage.Other ways include an external usb drive, a network attached storage, etc.

The choice is really up to you. The steps that follow are generic, and assume the intermediate storage is located at /migration/zimbra. If your path is different you will need to modify the scripts accordingly. To keep things organised, we will create separate folders for all the different migration files. Also make sure the path is readable / writable by the Zimbra user. In this case I would recommend:

“The commands below are to be run as the Zimbra user”

The command should last only a few seconds, depending on the number of domains on the server. A quick cat domains.txt will show us the available domains.

Again a quick “cat admins.txt” should list the domain admins, the same ones you see during execution of the “tee – a” command.
Next we export all the users.

This process will take some time, depending on the number of accounts. Since most accounts won’t actually have aliases, we will end up with a lot of unnecessary empty text files, which we will delete using

So far we have exported everything from our old mail server, except the mailboxes themselves and any filters the users might have created.

We also have the following backup folder structure :- 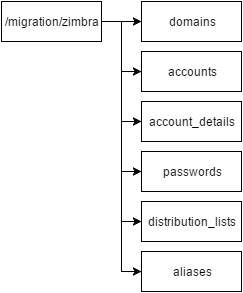 The next process will be the most time consuming of all the processes. Depending on the amount of data, exporting the data could take as long as a day if not more. Data import will take just as long.

To start the export of mailboxes, make sure to do it via a console or via a “Screen” session.

As the Zimbra user, goto /migration/zimbra and create a directory called mailbox_data.

You will start seeing mailboxes being exported, but this will take a while.

In the event that any mailboxes report errors during export, make a note of the problematic accounts, and try to re-export them later, by creating a text file :

and running the following command. The format of the file needs to be exactly like the format inside /migration/zimbra/accounts/users.txt. Use it as reference.

Step 8. Exporting email filters for all the accounts

Once the mailbox exportation completes, let’s also export any user filter settings. We need a bash script for this.

paste the script below into it;

The first step in the restoration process starts by restoring all domains. If you have already created the main domain on the new server, you can delete it from /migration/zimbra/domains/domains.txt

The next part assumes that the data we just exported in the above section is available or copied (in the same directory structure) on the new server.

If you have to copy the data, ensure that you issue a chown  -R zimbra:zimbra in /migration/zimbra to make sure, user zimbra has full acess to all the files and directories.

Warning: Any interruption during the execution of these scripts could result in database corruption, hence these commands should be run either from a console or via a screen session.

Step 9. Restore all domains to the new server

Login as zimbra user and issue the following commands :-

A quick visit to https://youserver-ip:7071 should confirm that the domains have been imported successfully.

Step 10. Restore all accounts and passwords

Restoring accounts and passwords requires the use of a small script.  Restoring each account will entail creating the account with a temporary password, and restoring the old password in another step.
create a directory called “scripts”, and cd to it, and open your favourite editor to create a file called restore_accounts.sh.

Paste this script to your file and save it.

Make the script executable chmod 777 restore_accounts.sh, and execute it.

The user accounts, and their relative passwords are now being imported into the new server. You might get an error every now and again saying :-

This basically means that the account which is currently being imported already exists. This is true for admin, anti spam and anti virus accounts (you may wish to delete these accounts from /migration/zimbra/accounts/users.txt. Also keep in mind that after the script runs, the admin password of the new server will now be the same as the admin password of the old server . The password you have created during the installation will be overwritten (unless you delete admin@domain.com from users.txt)

Go to /migration/zimbra and execute the following command to re-create the distribution lists.

Next, we need to populate the lists, using a very short bash script

Paste the following into the script and save it.

Make the script  executable, and run it.

Create a new script called restore_aliases.sh, paste the code below into it, and make it executable.

Then, paste the code below into it;

After migrating the exported mailboxes to the new mail server, go to the /migration/zimbra/mailbox_data directory.

This process will also take quite a while to complete, the users may use the server freely during the import. When their turn arrives, they will start seeing their mailbox starting to get populated with the emails they left behind on the old server.

Note:
If you get any errors, you can re-export, and re-import the problematic accounts by manipulating /migration/zimbra/accounts/users.txt accordingly and re-running the export command. If you get any “broken pipe” type errors it probably means that the tar archive got corrupted during the transfer for some reason or other, and is essentially incomplete.

With the mail filters successfully transferred to the new mail server, go to /migration/zimbra/filters, and create a file called import_filters.sh. Paste the script below into it, save and make it executable.

Paste the code below into it;

At this point, we have migrated all the user accounts, their passwords, all the distribution lists, and account aliases. For all intents and purposes, we have a fully working server.

Wait for the services to restart, and issue a zmcontrol status.

Once happy with what you see, login using a normal user account, and check to see if you can send emails to your domain, using the test server.

With all the above done,  your users should be happy using your newly migrated server. The only thing they will find missing are their account signatures.
What you can do in this case is to make the old server available on a temporary sub-domain (old-webmail.domain.com), so that the users can log in to the old server, and essentially copy and paste their signature to the new server.