This is a tool used by the RENU community to troubleshoot network issues. Once an institution is facing problems they are prompted to share their results with the NOC for interpretation. The big question is do you understand these graphs.

This write-up covers the basic features of the graphs and their interpretation.

You’ve captured something in PingPlotter that looks like evidence of a network problem. Let’s take a closer look and see what the graph tells us about the source of your network problem.

Take a look at your PingPlotter results. Do you see a red bar? If so, that means some data was lost between your computer and the target. This effect is known as packet loss, and if you’re seeing it on the final destination, there’s a good chance you captured a problem.

What about the black line? It shows how long it takes data to travel to your target and back. This measurement is known as latency. It’s another network problem indicator. The further to the right the black line is the longer it takes for data travel around the network. If you see high latency on your final destination, you’ve probably captured a network problem

Where the pattern begins, helps you understand the source of the problem. If the pattern starts on the first row in the graph (your router), you’re probably dealing with an internal network problem.

If the pattern originates somewhere in between the first and last row, the problem is probably outside your local network then contact the NOC it could be problems on the international circuit

Figure 2 Problems outside your network begin in the middle.

Sometimes other devices interfere with your wireless network. If you connect with ethernet (the cable) and the problem goes away, you probably have a wireless issue. 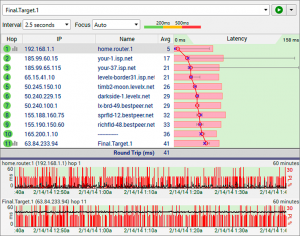 Bandwidth problems happen when your network usage exceeds your capacity. If your network problem happens during network-intensive activities like gaming, downloading, or multiple users, there’s a good chance you have a bandwidth issue. 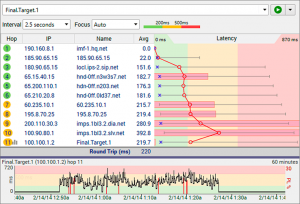 When network devices fail, it’s a hardware problem. If you don’t think you’re dealing with bandwidth or wireless issue, it’s time to start looking into hardware. 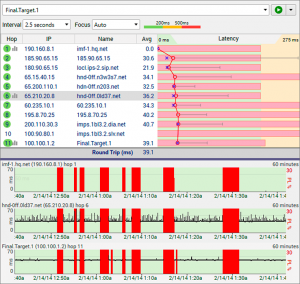 All the examples above can be categorised as Internal network issues. If you suspect more that the problem is outside your local network contact the NOC.

A bypass switch (or bypass TAP) is a hardware device that provides a fail-safe access port for an in-line active network device such as an intrusion prevention system (IPS), next-generation firewall, network switch etc. if the device loses power, experiences a software failure, or is taken off-line for updates or upgrades, traffic can no longer flow through the critical link. The bypass switch or bypass tap removes this point of failure by automatically ‘switching traffic via bypass mode’ to keep the critical network link up.

A bypass switch has four ports. Two network ports create an in-line connection in the network link that is to be monitored. This connection is fully passive; if the bypass switch itself loses power, traffic continues to flow unimpeded through the link.

Two monitor ports are used to connect the in-line device. During normal operation, the bypass switch passes all network traffic through the network (CPE) switch as if it were directly in-line itself. But when the switch (CPE) loses power, is disconnected, or otherwise fails, the bypass switch passes traffic directly between its network ports, bypassing the CPE, and ensuring that traffic continues to flow on the network link.

A bypass switch monitors the health of the CPE by sending heartbeats to the network switch (CPE) as long as the network device/switch is on-line, the heartbeat packets will be returned to the optical bypass switch and the link traffic will continue to flow through the CPE. 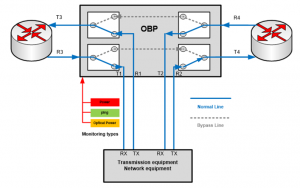